Please come here to inform us of new and interesting bugs so we can hunt them down and destroy them! Pics and videos demonstrating these bugs are also welcome!
Post Reply
1 post • Page 1 of 1 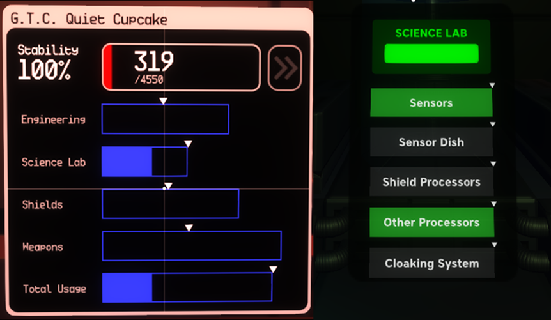 When power is limited to the science subsystem, both the sensors and "other processors" category are reduced by the same amount, as expected.

Now, I limit power to sensors on the science subsystem. I would expect that the "excess" power would be shunted to "other processors", yet it is not.

Notice how there is power to spare on the engineering panel in both the total usage and science bars, yet the other processors bar is not full. Again, this bar represents just a single ARX-CD. No JP or any other processor. The ARX-CD should be trying to draw a full 2000 MW when possible, but it is not despite there being power available.

Steps to Reproduce: Hop on a ship and unequip any processors that are not "always on". Limit power to science in engineering, then tweak values on the science subsystem itself. I haven't tested the others, as they are tricky to do in single player.